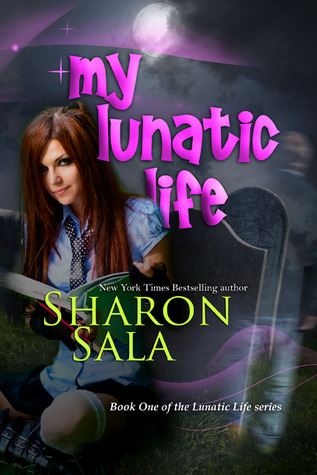 She plays for Team Spirit.

High school senior Tara Luna’s got all the usual teen problems: a new school, her attraction to a hunky guy, feuds with the Mean Girls, being regarded as an oddball outsider-PLUS she has psychic powers, a duo of protective, meddlesome ghosts AND an angry, threatening teen girl ghost who wants Tara to solve her murder-or else.

Now you know why she calls this “my lunatic life.”

Well this was a very light / fluffy read (with emphasis on very). There’s no other way to describe this book. Even though it was entertaining, and very amusing when a certain ghost started meddling, there was not much depth in this story. Everything went too smooth, too easy. Even when watching CSI, they usually end up with several dead ends before finding the murderer. Here it was way too obvious how the story would end and therefore I could not feel any angst or excitement for figuring everything out correctly.

There were also times in the book were the point of view switched to Flynn, to see his thoughts about certain events. Normally I’m someone who can’t get enough from reading through the eyes of the romantic interest, the very hot bad boy, who might or might not have certain feelings for the main character. This time, however, I cringed every time I was in Flynn’s head. It just felt wrong (sorry can’t describe it any other way). It was like Flynn didn’t have his own voice, his own identity. It seemed as if he became Tara, what should not be possible even with all her powers. And it just felt awful.

We also have a major case of insta love. Fortunately there were not a lot of romantic moments. That was another thing that made me cringe. Unless you’re soulmates (and even then) it’s just not possible to develop such strong feelings in such a short amount of time. Thank God romance wasn’t a big issue in this story and was kept in the background.

The ghosts were very fun, though. Especially Millicent and her mother-bear-whose-cub-is-threatened behavior made me smile. I really liked her. It was a shame, though, that we only got to know the ghosts as clouds of plasma with a voice. I’d really liked some more info. Like how old they are, how they became a ghost, what they look like. And most of all: why stick with Luna? That and more questions came to my mind. But only a very few got answered…

Tara was also a character that I liked quite a bit. Even though she could be dense at times. Who would otherwise go and confront a possible murder all alone, without saying anyone where she was going???? On the other hand she’s got just the right amount of spunk to stand up against bullies. Although having psychic powers and two ghosts as back-up helps a lot 😉

2 HEARTS. A very, very light book where you don’t have to use your mind. Just sit back and enjoy, even with cringe worthy scenes like Flynn’s point of view and the attempt at romance. Though, Tara and the ghosts are amusing enough to stop you from throwing the book away.

What did you think of it? Please leave a comment 😉

I'm a student, avid reader and love to read books with shifters in it ;) View all posts by Witchmag

What do you think? Cancel reply